Places: Botswana - A Trip of a Lifetime

In September, I was afforded the opportunity to go on a Botswana Fam Trip organized by Golden Africa Safaris. The whole trip was an introduction to their Roving Camp and setups in the Okavango Delta and Makgadikgadi in conjunction with Machaba Safaris and Natural Selection.

My first stop was a night at Ngoma Safari Lodge in the Western part of Chobe, the Chobe Forest Reserve. On arrival I was welcomed and checked in by Moreri, who later took us on our first game drive in the Chobe flood plains, a very private game drive compared to the usual game drives you experience in the Kasane Area. We finished up our drive with a sundowner on the escarpment which was amazing. The next morning, we had breakfast overlooking the beautiful views before heading to Chobe Marina for a 2 hour boat cruise on the Chobe River. We then stopped at the Caracal animal rescue center for a visit which was very interesting, had a quick stopover for lunch in Kasane town before our Mack Air flight to Savuti Airstrip.

Upon, arrival we were welcomed by Frank, our Golden Africa Safaris guide who drove us to our campsite where we stayed for 2 nights. The drive was done as a relaxed and informative game drive transfer, and we got to hear Frank’s stories which were full of passion for the Savuti. We got into camp just in time for afternoon tea and I must say I was really blown away by the camp setting and how well thought out it was. The attention to detail did not go unnoticed, and the sitting area, dining area, and en-suite bathrooms with flushing toilet and running water was a great surprise and very welcome. Needless to say, Golden Africa’s Roving camp exceeded my expectations! We had a short game drive and sundowner stop for our G&Ts and then headed to camp and en route we saw a leopard on a kill. On arrival back into the camp we walked into a beautiful “dining room” set up under the stars. The next morning, we had our game drive and a site inspection of Desert and Delta Savuti Camp, and on our way back to camp, we stopped over at the Bushman’s paintings. That afternoon, on our game drive we saw lions and a good sighting of Roan.

The next day, we headed to the Khwai Concession and our scenic drive was about 5 to 6 hours. We arrived at Little Machaba and did a site inspection and then had lunch at Machaba before our amazing 5 minute Helicopter Scenic flight to Khwai Private Reserve. We were welcomed by our guide Johnson at Little Sable, we were checked in and had a short siesta, and went on a relaxing boat cruise. We got back to camp and had a lovely traditional night.

The next day we went on a game drive and had a great sighting of lions. We then did a site inspection at Tuludi Camp which I loved and we had some fun using their slide! We later checked in to Sable Alley where we had homemade pizza for lunch followed by a well needed siesta before a lovely Mokoro trip later on that afternoon. The next day our guide MD, took us on a morning game drive which was incredibly special, we had a sighting of a Leopard with two cubs very close and we sat with them for a long time. We went back to camp and had a delicious lunch and were then transferred to the airstrip for our Helicopter flight to the Southern part of Moremi. Our Helicopter flight was 15 minutes and we landed just outside Moremi Game Reserve where Rob and Mowa were waiting for us.

The transfer from the gate to the Golden Africa campsite was about a 1-hour drive and on our way to the camp we saw 3 cheetahs which was an incredible start to stay here. We also drove past the XINI lagoon where we saw a lot of different animals and birds. The Xini area is a beautiful area and one of my favourites on the trip. We arrived at camp just in time for some afternoon tea followed by an afternoon game drive with Mowa who was our guide for that day. We went back to the cheetah sighting and also saw some Jackals before having an evening sundowner. The next morning was absolutely magical as we saw three cheetahs and a leopard all together – made even more special by the fact that there were not many vehicles on the sighting. We also watched the leopard trying to hunt a yellow-billed kite, which was very exciting! Rob then said “I would really like this to be a CAT-TRICK morning’’ because he only had 2 Cat tricks in his 18 years guiding career and low and behold, just a few meters from the Leopard and Cheetah sighting we saw a pride of Lions. It was just a gift that kept on giving. We went back to camp for lunch and a siesta. On our afternoon game drive we had our last beautiful sundowners with the Golden Africa guides Frank and Mowa in a really beautiful setting.

The next morning, we had two male lions right in front of the camp which was a very nice send-off, we then took a game drive transfer to the airstrip for our Mack Air flight to Kiri Waka Airstrip for Kiri Camp, a new camp for Machaba Safaris situated in the South Eastern part of the Okavango Delta. On arrival, we were welcomed by our guide Tops who drove us to camp which is just 3 to 5 minutes from the airstrip. We stayed there for 2 nights. During our stay, we had a boat cruise, Mokoro, and game drives with Tops.

After our stay at Kiri Camp we flew to Maun with Mack Air for our connecting flight with Major Blue to the Makgadikgadi Pan. The flight is about 45 minutes from Maun Airport to Jack’s Airstrip and we were welcomed by Laps who was our guide during our stay. Just 10 minutes away from the Airstrip on our way to the camp, we had two lion sightings – one sighting of lions had a kill, and we also saw a lot of Jackals just waiting around the lion kill. Our first stop was at Jack’s Camp which is 20 minutes from the airstrip. We arrived in time for high tea which I loved - it was really an Out of Africa experience. That afternoon, we went on a short walk with the Bushmen and went back to camp for an early dinner as we wanted to then experience a night game drive.  On our night drive we saw a pack of Jackals attacking an injured Zebra which was difficult to watch so we started searching for the Aardvark, and we were very lucky to see a very shy one for a few minutes before it went into hiding. We sat for a few minutes in the hope that it would come out again but it sadly didn’t. However, this was still such an amazing experience as at the start of the trip I jokingly told everyone I wanted to see an Aardvark and my wish was granted!

The next day, we started off early in the morning to go and see the Meerkats waking up and having their interactions. On our way, we passed through a brown hyena den and saw one hyena pup. We then spent a few hours with the Meerkats which was one of my highlights after the Aardvark sighting. We had lunch at Jack’s Camp and went to San Camp for a sight inspection on our way to Camp Kalahari. On arrival at Camp Kalahari, we were welcomed and given a camp orientation before being taken to our rooms for a siesta.  After tea we took a short game drive to Jack’s Camp from where we started our quad bike safari to the Saltpans. Here we spent a night out on the open saltpans under the stars which was an incredible experience. The next morning, we took our quad bikes and drove back to Jack’s Camp and then flew back to Maun Airport where I said goodbye to the Golden Africa team.

I continued on my own visiting some of the Wilderness Safaris camps for the next three days. My first stop was at Qorokwe for one night which I loved. This is a Classic Camp offering a very good standard of accommodation, food and service and the game there was incredible. On my first drive with my guide John, we saw Wild dogs. We watched them for a while and saw them play and greet each other and also make an attempted kill. The next morning, we went on a short game drive and saw three cheetahs and a pride of 20 lions. Wow!! We went back to the camp had a quick lunch before flying to Vumbura for 1 night. On arrival, I was met by Chris who guided me during my stay. I enjoyed a mokoro activity and a boat cruise to Little Vumbura where I had a short site inspection. Little Vumbura is a Classic Camp and I loved the more personal and intimate feeling of this camp.  Vumbura Camp is one of Wilderness’s Premier Camps and is much larger which the camp being split into Vumbura South and North. I was very impressed by the high standards in this camp and attention to detail.  I then flew to Duma Tau in the Linyanti which was my last and final stop. I loved the camp and its wonderful location on one of the main channels of the Linyanti River. During my stay I had a short game drive and saw a lovely male lion as well as various other animals. The following morning I did a boat cruise on their barge which was a special way to end my stay in Botswana before my flight to Kasane Airport. En route to Livingstone Airport I had a short site inspection of Toka Leya Camp which is looking lovely and fresh after a soft refurb earlier this year. All in all it was a wonderful trip and I look forward to sending many clients to Botswana in the future. 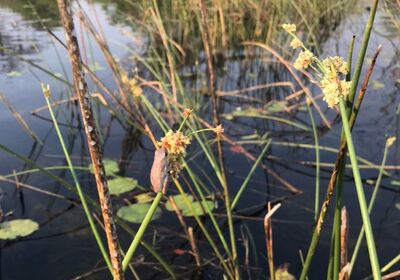 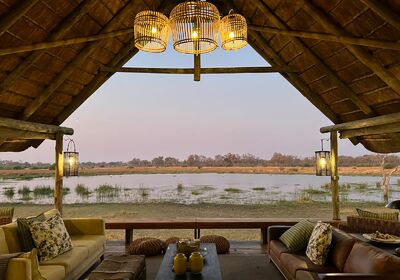 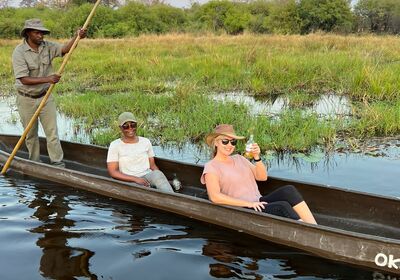 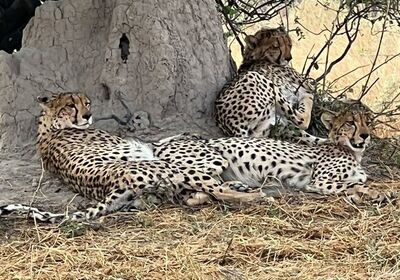 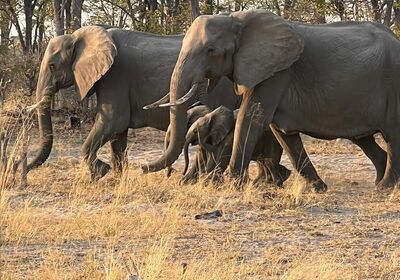 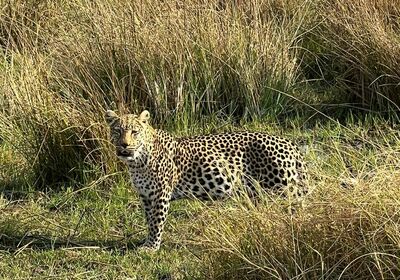 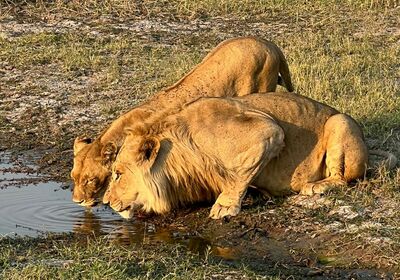