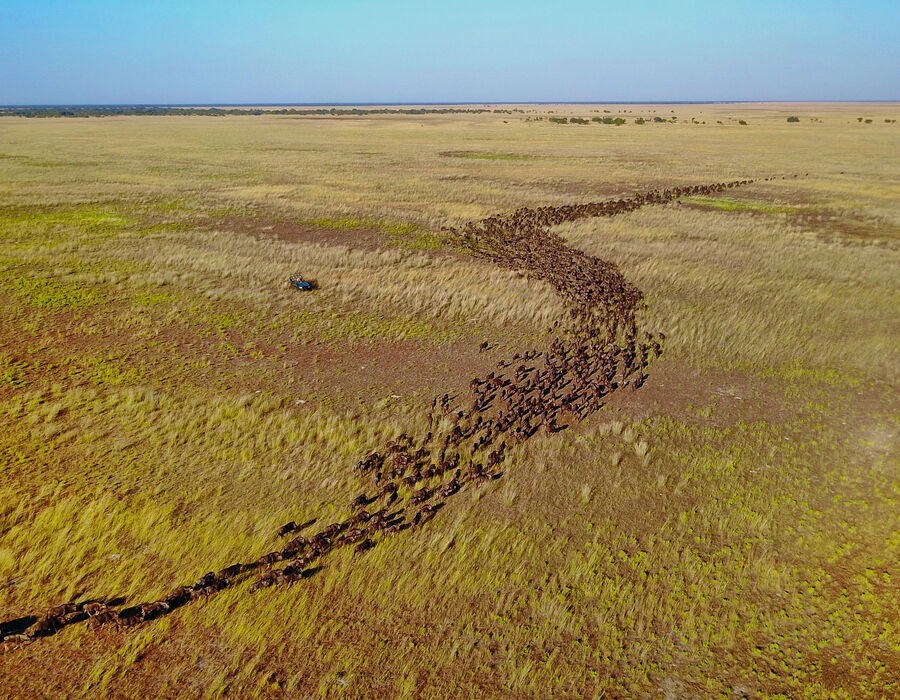 With a rich conservation heritage that dates back to the late 19th century, Liuwa Plain National Park shows us that people and wildlife can share a wilderness landscape in a mutually beneficial and harmonious way.

The park is an expansive, flat plain that falls within the Zambezi catchment and is flooded each year from November to April. It was designated a game reserve of Barotseland by King Lewanika in the 1800s and became a national park in the 1970s. It is home to approximately 10 000 people legally living within the park, that share it with healthy ungulate populations, 330 different bird species, and growing numbers of cheetah, lion, spotted hyena and African wild dog.

The onset of the wet season brings an estimated 30 000 blue wildebeest thundering into the park, along with zebra, red lechwe, oribi, eland and buffalo. This is the continent’s second largest wildebeest migration (the largest occurs across the Maasai Mara and Serengeti) and an incredible wildlife spectacle. The presence of so many game animals is welcomed by the park’s predators and scavengers, and opportunities to watch a thrilling chase increase over this time.

This is also the time for exceptional birding safaris as huge numbers of migrants, including thousands of black-winged pratincole, come to the plains to nest and breed. It provides refuge to threatened species like the slaty egret, whiskered tern and grey crowned crane.

Lady Liuwa was the famous last lioness of the park, who for nine years roamed it alone after poaching and illegal trophy hunting had wiped out all other lions. In 2008, African Parks began a series of lion reintroductions to reunite Lady Liuwa with her own kind, and new life began as she joined a pride that grew to 10 lions. She died nine years later, naturally and at the ripe old age of 18, having left behind the beginnings of the park’s renewed pride of lions.

Liuwa Plain National Park is a truly off-the-beaten-track piece of Zambian bush and accessible to those wanting to self-drive (4x4 only), or via private charter or scheduled seat in charter flights operated in and out of Kalabo Airstrip twice a week. Four of the five community-owned and -run campsites are located within the park, the other is just beyond its borders. There is one lodge inside the park for those that want something more luxurious, which can be accessed via helicopter transfers from the nearby Kalabo Airstrip.